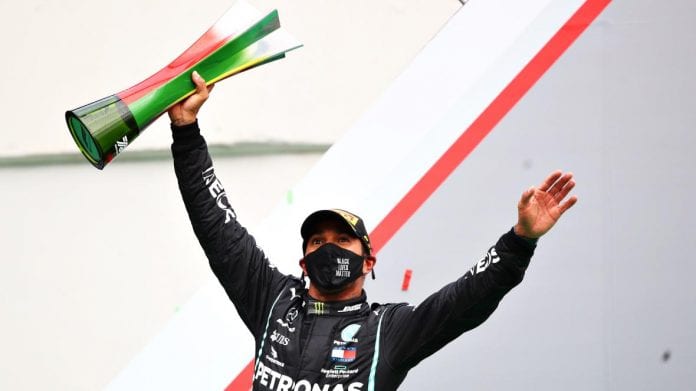 At the age of 35, Lewis was celebrating his 161st podium and his 92nd win. This 92nd win was significant as it meant Lewis achieved more 1st places than any other driver in history. Racing in car number 44 since the age of 9, Lewis Hamilton made F1 history, taking the crown from Michael Schumacher who has clocked in 91 wins for himself. Other notable names that Hamilton has overtaken in terms of wins are Sebastian Vettel with 53, and the legend Ayrton Senna who badded 41.

Lewis took his 71st win with Mercedes, after 21 with McLaren. Despite suffering cramp in his right calf during Sunday’s race, he won by a whopping margin of 25.5 seconds, something which is pretty incredible given that Valtteri Boras, who finished in 2nd, was driving the very same car. Not only this, but unless you were one of the top four finishers, you would have been lapped by the British driver.

After a long and clearly emotional hug with his dad, Hamilton went on to say that “the achievement would take some time to sink in.” He later added that although he achieved his dream feat, he was still in race mode mentally, and that he would be pushing flat out for next season.

With 5 races to go, the F1 driver’s title will surely be his, making it his 7th. However, we are pretty confident in saying this will not be his last.