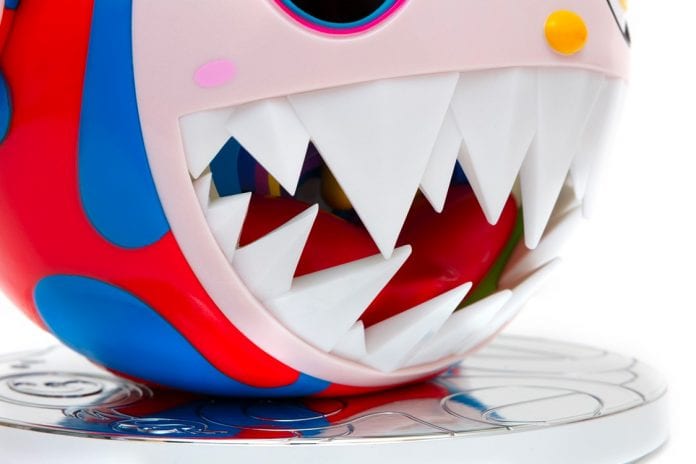 The collectable figure is clearly a stark reimagining of Takashi’s previous creation, Mr. DOB. As for what the new piece features, it boasts a wide variety of colours, most notably a contrasting blue and red combination across the head. As well as this, the mascot holds an easy-going and dopey appearance on one side, while the other shows a more vicious and terrifying emotion.

Each figure is made of painted cast vinyl and lands with an engraved metallic disk stand. Rounding off the almost one square-foot creation is “©TM/KK MADE IN JAPAN” etched on the bottom of the figure and stand alongside the artist’s signature and flower motif.

The piece’s dual-personality, as well as the fact that it’s marking the 28th year since Murakami created his original DOB, means that it’s inevitably going to become a highly sought-after mascot. To make things worse, Murakami has stated that only 300 pieces will be available.

Take a look at the Melting DOB figure below. If you like what you see then sit tight as the piece is dropping exclusively in Asia via Perrotin Hong Kong’s store. It will set you back $16,800 HKD (£1592) and will be available on the 28th of January.

Free Takashi Murakami Artwork… For Those Who Can Find It