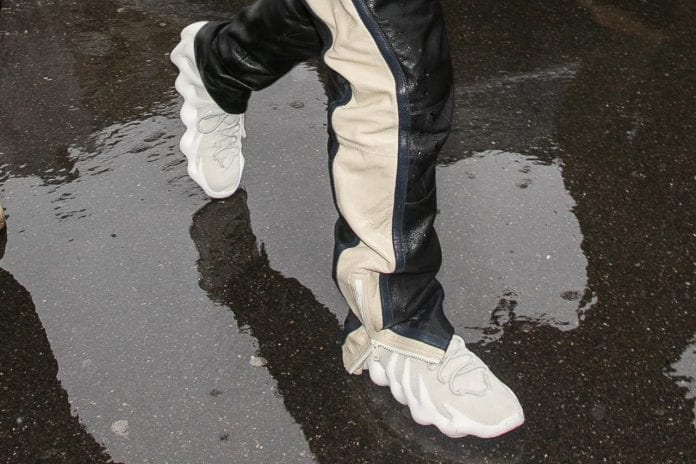 The American rapper, singer, songwriter, record producer, entrepreneur and fashion designer that is Kanye West continues to draw the eyes of fashion and sneaker enthusiasts everywhere, this time due to the revealing of one of his latest YEEZY silhouettes.

The fashion and music mogul turned to a pair of LV Millionaire sunglasses, a loose-fitting navy jacket, leather trousers and the pair of highly-anticipated adidas YEEZY 451 sneakers that have been catching everyone’s attention. The latest YEEZY sneakers appear to be boasting a Primeknit upper that notably sees the midsole climb up high upon it. To give a better idea as to what to expect, many have been comparing the 451’s aesthetic to that of the Deion DTs.

The pair were first made public through a simple sketch all the way back in 2017, however, since then it appears that the idea has been fleshed out to the extent that we could be seeing a release date in the near future. From previous leaks, fans can expect the models to launch in “white/blue,” “volt green/black” and “fuchsia/black” colourways, however, a specific release date is yet to be announced.

Take a look at the adidas YEEZY 451 sneakers below, if you like what you see then why not sign up to our newsletter so you can be the first to find out about the upcoming pair as more info is announced.