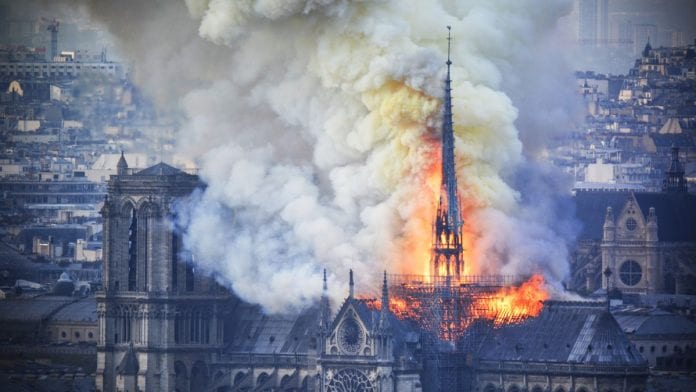 The 15th of April was a tragic day for everyone across the globe but particularly heart-breaking for those in France as the country’s iconic 856-year-old Notre Dame Cathedral went up in flames. As for how this occurred, the fire seems to have been as an accidental consequence of the on-going construction on the building, however, an investigation has been opened by the prosecutor’s office to clarify.

As for the extent of the damage, the cathedral has reportedly had two-thirds of the roof destroyed as well as its 19th-century spire. Furthermore, the three iconic rose windows first installed during the medieval era reportedly exploded due to the high temperatures. However, since then more detailed reports have stated that although the West and North windows have been damaged to an extent, all three actually remain intact, I guess we will have to wait for further examinations to confirm their state.

However, it’s not all bad news as the main edifice and two bell towers were spared from the destruction as a consequence of the hundreds of firefighters that fought the blaze. As well as this, the City’s mayor, Anne Hidalgo, announced – to many people’s relief – that most of the artwork and religious relics were evacuated before they could be claimed.

Once the dust settled on the event, President Emmanuel Macron stood outside the cathedral and vowed to rebuild the beloved structure, saying: “The worst has been avoided, but the battle isn’t fully won yet.” In fact, Macron has already launched an international fundraising campaign in order to raise money for the expensive reconstructions, and as of yet, tens of millions have already been raised thanks to the generosity of people around the world.

Notre-Dame is aflame. Great emotion for the whole nation. Our thoughts go out to all Catholics and to the French people. Like all of my fellow citizens, I am sad to see this part of us burn tonight. https://t.co/27CrJgJkJb

Notre Dame is one of the world’s great treasures, and we’re thinking of the people of France in your time of grief. It’s in our nature to mourn when we see history lost – but it’s also in our nature to rebuild for tomorrow, as strong as we can. pic.twitter.com/SpMEvv1BzB

My heart goes out to Paris. Notre Dame is a symbol of our ability as human beings to unite for a higher purpose—to build breathtaking spaces for worship that no one person could have built on their own. I wish France strength and shared purpose as they grieve and rebuild.

God bless the people of France!