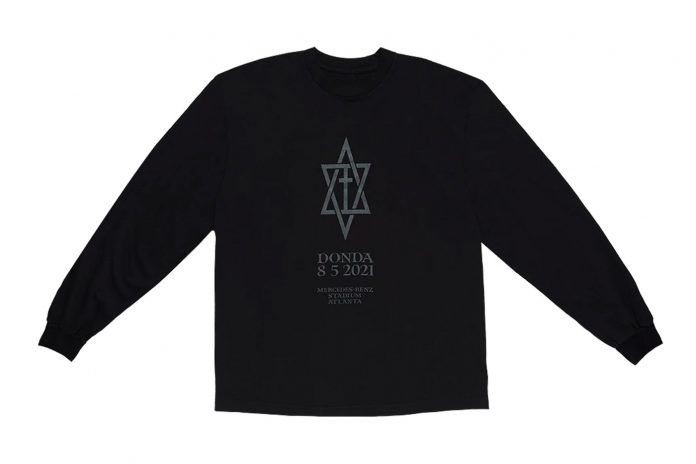 The American rapper, songwriter, record producer, businessman, and fashion designer that is Kanye West recently threw yet another album listening party for his upcoming album, DONDA. The event, which happened last night, saw Kanye West preview the project at the Mercedes-Benz Arena in Atlanta.

There were only two products dropped alongside the event, the first of which was a DONDA long-sleeve T-shirt as well as a digital copy of the album the arrives with all-black album artwork. Similar to the artwork, the tee boasts an all-black colour, on top of which sits a simplistic design. Specifically, a tonal print can be seen in the centre of the garment, it depicts The Star of David with a cross in the middle. Underneath this sits text that notes the event as well as the date.

The DONDA merch is available now via shop.kanyewest.com, if you do purchase the tee just beware that the T-shirt is shipping in 10-12 weeks while the album will become available on the day of release. It is also important to note that a portion of all proceeds from the album launch merch will be going to THE DONDA FOUNDATION.