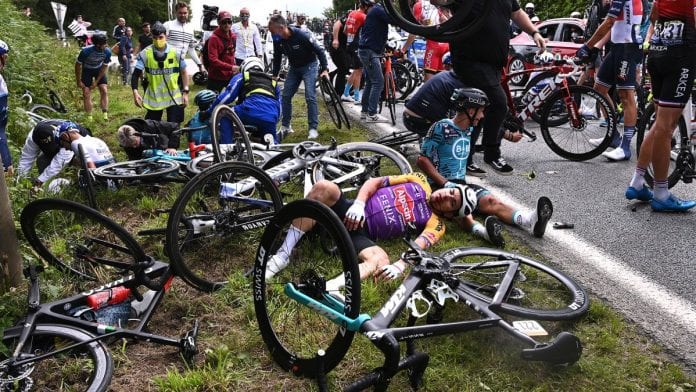 The Tour de France came to a sudden halt on Saturday after one fan leant into the racetrack and brought down a cyclist. The fan’s sign caused German rider, Tony Martin, to fall. However, Tony’s downfall lead to almost the whole brigade of cyclists piling up.

The female spectator can be seen in the Finistère region of Brittany holding a placard that reads “granny and granddad.” The yellow-coat wearing spectator is looking ahead at the cameras, consequently, she couldn’t see the approaching peloton, or how far the sign was protruding into the road.

Despite the incident clearly being an accident, police say they are trying to trace the individual in order to charge her. As for what she is guilty of, they aim to charge the woman with “deliberately violating safety regulations and causing injuries that might prevent someone working for up to three months.”

In fact, the crash led to one rider pulling out the competition completely, while another eight riders required treatment by the event’s official doctor.

Due to the severity of the outcome, Tour de France Deputy Director, Pierre-Yves Thouault, said the tour would take legal action against the woman, stating: “We are suing this woman who behaved so badly. We are doing this so that the tiny minority of people who do this do not spoil the show for everyone.”

According to police, the woman fled the scene after the crash, prompting investigators to appeal for witnesses to get in touch. Following the crash, tNow that the crash is trending, the Tour de France took to their Twitter to state: “For the Tour to be a success, respect the safety of the riders! Don’t risk everything for a photo or to get on television!”

I am in complete awe of this person singlehandedly ruining the #TourDeFrance. Pure chaos! pic.twitter.com/wfgsfnfZkB