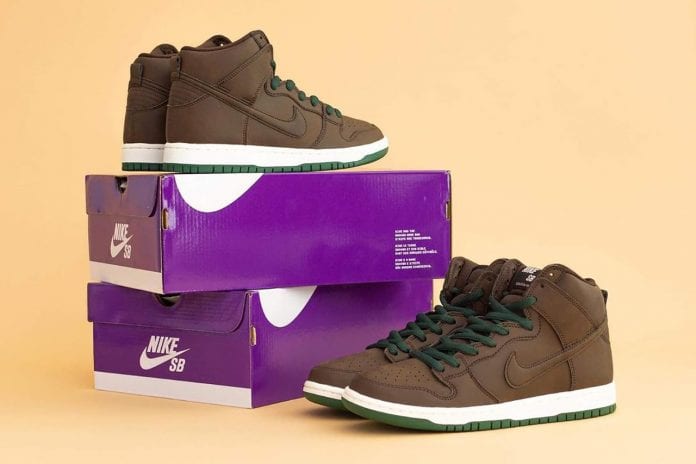 As for what to expect, this new version of the classic silhouette, titled the Dunk High “Baroque Brown,” offers sneakerheads a pair that is mostly brown across the surface. In fact, only the laces and sole unit land in a different hue. Specifically, the laces boast a dark green colour while the midsole arrives in a clean contrasting white. Rounding off the sole unit is the outsole which matches the laces in an Earthy green.

The construction is, of course, the most notable attraction for many potential buyers. This is one of the few pairs that Nike has released that is fully vegan. Not only that, but this could be the only fully vegan Nike SB Dunk High around. The textile used on the pair does a good job at mimicking the texture and feel of genuine leather. Last but not least, the shoes feature a subtle Swoosh and Nike SB branding on the tongue.

Take a look at Nike SB’s Vegan Dunk High “Baroque Brown” below. If you like what you see then sit tight as the pair are set to drop at the end of this month and the beginning of February. It appears that they are being widely released in the US while Europe will only see the pair make its way to a handful of outlets.

How To Cop The Supreme X Nike SB Dunks

How to Cop the Nike SB Dunk High “Strawberry Cough”