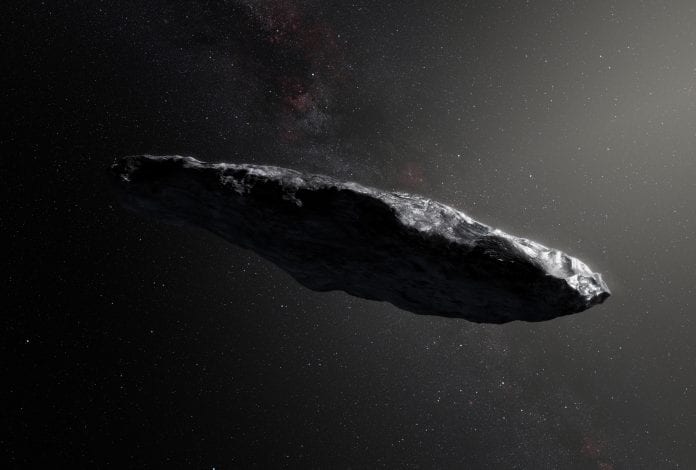 When a crackhead in Hyde Park starts talking about the aliens that have visited Earth, you tend to switch off. However, when the Harvard University professor, Avi Loeb, starts talking about alien life, you may pay attention. The theoretical physicist and chairman of Harvard’s astronomy department recently revealed his theory about an unidentified object that entered our solar system three years ago.

Explained in his upcoming book, titled Extraterrestrial: The First Sign of Intelligent Life Beyond Earth, he goes into detail as to why he thinks Alien technology has already made its way to Earth. The interstellar object, “Oumuamua,” Hawaiian for “scout,” was spotted by the Pan-STARRS telescope at Hawaii’s Haleakala Observatory in 2017. Three days after initially being spotted, Oumuamua was measured accelerating towards the sun before coming towards our planet “moving swiftly toward the constellation Pegasus and the blackness beyond,” according to Loeb.

Many scientists have categorised Oumuamua as your average comet, but Avi Loeb disagrees, firstly referencing its peculiar form, with the object being five to ten times longer than it is wide. Although its shape is definitely unique, Loeb understands that more evidence is needed.

This is why Avi wants to point people’s attention to more concrete facts regarding Oumuamua, for example, it was unusually bright – “ten times more reflective than typical solar system [stony] asteroids or comets.” Furthermore, the object’s “excess push away from the sun” was the detail that “broke the camel’s back” for him. Specifically, this object simply accelerated, something which a normal comet wouldn’t do. Usually, an object would get faster the closer it gets towards a star, only for it to slow down as it starts travelling further and further away.

Now, although it’s interesting to speculate about a comet that passed us by three years ago, it doesn’t really offer us the opportunity to make any firm conclusions. That’s why we are sitting tight to see how much – if any – evidence is released by the US Government themselves.

As for why they would be releasing evidence now, rather bizarrely a new Covid-relief bill is putting a countdown on various departments to share what they know about possible alien tech and life. Specifically, the new $2.3 trillion COVID-19 relief bill was signed by President Donald Trump on Sunday. In which, includes a 180-day countdown for the Pentagon and other American intelligence agencies to disclose all the information they have regarding unidentified flying objects, or what the government calls “unidentified aerial phenomena.”

The countdown wasn’t actually outlined within the bill itself, but instead in a “committee comment” from the Senate Intelligence Committee. To be precise, the comment states that it “directs the [director of national intelligence], in consultation with the Secretary of Defense and the heads of such other agencies … to submit a report within 180 days of the date of enactment of the Act, to the congressional intelligence and armed services committees on unidentified aerial phenomena.”

All we can do is sit tight for now and see what comes out in the future. If you want to be the first to know then why not sign up to our newsletter?

What Happened at Capitol Hill

Iran vs. America: Is it World War III?