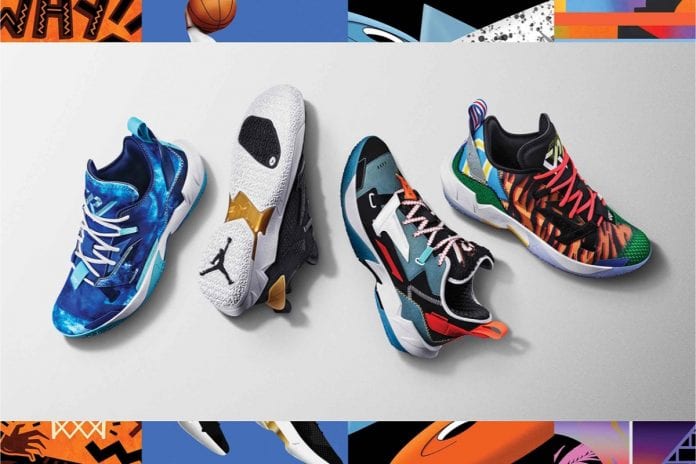 Washington Wizards and NBA superstar, Russell Westbrook, has officially revealed his Jordan Why Not Zer0.4 shoes. Westbrook will be making debut appearance with the Wizards tomorrow night hopefully sporting his new kicks.

The Jordan Brand officially revealed the shoe earlier today in collaboration with Japanese fashion label, Facetasm. The Why Not Zer0.4 is not too dissimilar from its predecessor – the Why Not Zer0.3. However, the double-webbed lacing system and the jagged-edged midsole moulds have been designed into a less aggressive shape. The sole of the shoe now sports a double-stacked Zoom unit with a tyre like print engraved in them.

The Why Not Zer0.4’s are dropping with a selection of colourways; including the “Upbringing” which is inspired by Westbrook’s upbringing in LA, the “Family” colourway and the “Trust & Loyalty” colourway. As well as this, Facetasm will be releasing their partnering cloth items.

The Russell Westbrook’s Jordan Why Not Zer0.4 shoes are being released in batches, with the first colourway dropping on January 6th 2021, the second on January 14th 2021 and the third on February 25th 2021. The Facetasm clothing line-up will be releasing on January 27th 2021.

You can take a closer look at the collection and read about some of the inspiration behind it HERE. Also, be sure to subscribe to our newsletter, to never miss a drop date.

How to Cop the Air Jordan 1 “Hyper Royal”

How to Cop the Air Jordan 1 “University Blue”