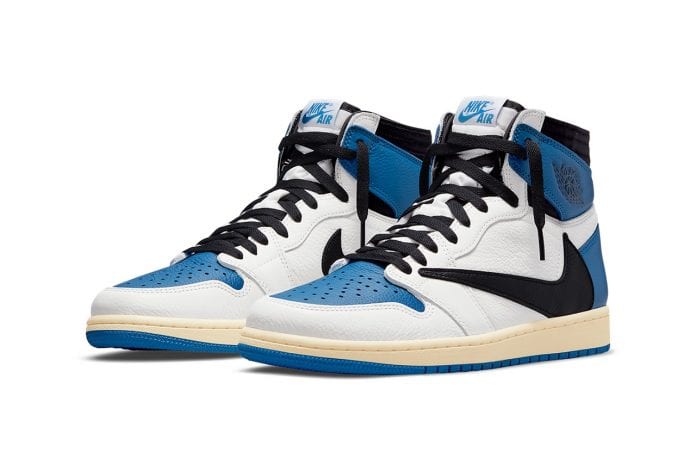 Travis Scott appears to be the latest rapper to be releasing a never-ending line of sneakers. This is why it’s not too surprising that we can expect yet another release from the rapper, this time in conjunction with not only Nike but also fragment Design.

The collaboration sees Hiroshi Fujiwara‘s fragment design revamp the Air Jordan 1 with forefoot overlays and nylon tongues. As well as this, Travis Scott’s synonymous reversed Swoosh appears in black across the lateral sides of the pair. This black strongly contrasts the rest of the construction which takes the form of blue and white adorning premium leather.

As for the rest of the sneaker, colour blocking appears throughout. Specifically, the previously-mentioned white covers everything but the toebox, ankle flaps and heels, they instead opt for the “Military Blue.” Rounding off the pair are cream midsoles, the Cactus Jack head on the left shoe and fragment‘s signature bolt logo on the right.

Take a look at Travis Scott’s fragment design x Air Jordan 1 below. if you like what yous ee then sit tight as they are set to release in the next couple of weeks via Nike’s SNKRS. If you want to be the first to know exactly when then make sure you sign up for our newsletter.