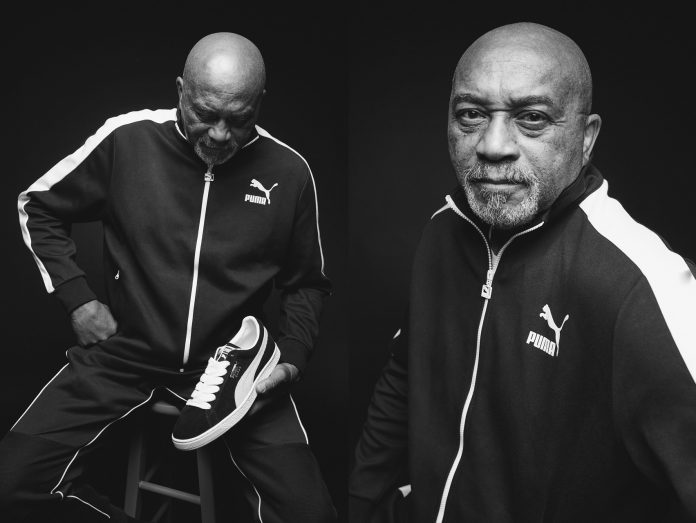 The former American track & field athlete and wide receiver, Tommie Smith, made history after breaking the 200-meter sprint record and winning a gold medal at the 1968 Olympic Games. However, it wasn’t so much the sporting feat but his post-win gesture that made the day so iconic.

This act of protest made a significant impact on the culture at the time, with the imagery of the event continuing to make one now. Tommie wore a black glove to express African-American strength and unity as well as black socks and no shoes to symbolize African-American poverty. However, in this image you will see his sneakers beside him, provided by PUMA, his sponsors then and still to this day, 50 years later.

“I’ve been with PUMA for over 50 years, because I view that company as a family, and not someone who gave me shoes to run,” said Smith. “And the shoes that I ran in you saw on the victory stand, and that was a social positive for me, to run for something that would grow later on in a way that I could help others as PUMA helped me move through that particularly difficult time.”

PUMA is now revamping the PUMA Suede to pay tribute to the sprinter. Limited to 307 pairs in salute of Smith’s Olympic jersey number, the ultra-premium sneaker features an OG black/white colour scheme and was crafted in Italy from premium leathers and suedes. Each pair is individually numbered on the heel in gold. Furthermore, each pair comes packaged with a certificate of authenticity that’s signed by Smith himself.

Take a look at the PUMA x Tommie Smith Suede below. If you like what you see then unfortunately you will have to admire them from afar. All 307 pairs were seeded to a select group of PUMA athletes and family members, and will not see a retail release.