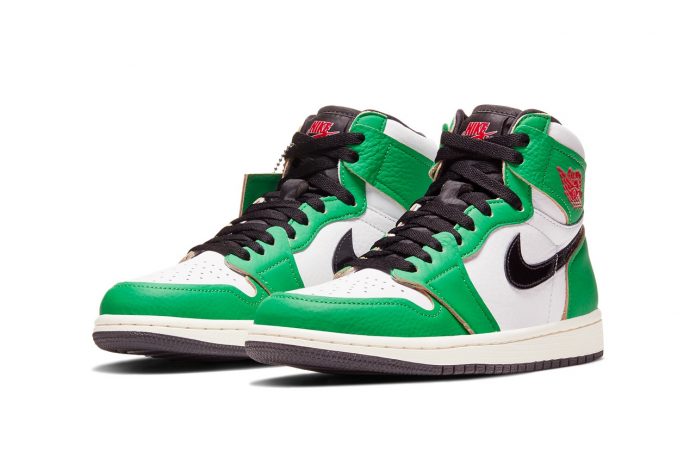 The Jordan Brand is back at it again, dressing their much-loved Air Jordan 1 sneaker in yet another colourway. Titled “Lucky Green”, the latest colourway is a women’s exclusive, inspired by a rookie Michael Jordan‘s 63-point game against the Boston Celtics in the 1986 NBA Playoffs.

If the name didn’t give it away, the new Nike Air Jordan 1 has its uppers dressed in vivid green, something which contrasts nicely with the pristine white that makes its way to the rest of the shoe. The only exceptions to these two hues is the red Jordan branding on the ankle and the black Swoosh along the lateral sides.

Fine-tune details such as the eyestays which aren’t fully stitched on, and the insoles which rock a special hardwood print help elevate the pair. Last but not least, Sail midsoles and black outsoles round off the highly-anticipated offering.

Take a look at the Air Jordan 1 “Lucky Green” below. If you like what you see then you’re in luck as they will release via Nike SNKRS on the 14th of October 14. They will set you back $170, approximately £150. Although it’s a women’s style, it’ll be available in extended sizes that will allow for larger-footed men to purchase them too.