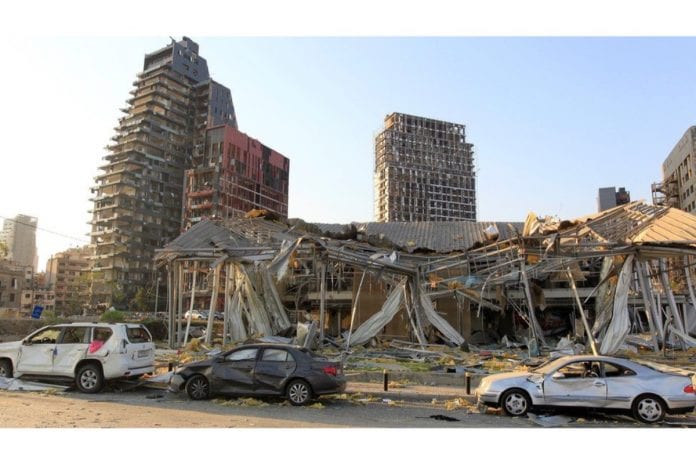 At around 6:00 p.m. yesterday a devastation explosion took place in the Lebanese capital, Beirut. It’s unclear what caused the explosion, but the effects have been devastating.

The blast took place in the Port of Beirut and caused catastrophic damage to the city. Buildings took extensive damage from the shockwave of the blast, which could be felt 5 miles away, blowing out windows, roofs and floors of anything in its path.

Video footage has emerged from the city showing a fire (reported to be fireworks) in a warehouse; next to the ports grain silos. Suddenly, a colossal fireball shoots into the air, causing a mushroom cloud and a sonic blast, which raged through the city.

The Prime Minister of Lebanon has blamed the explosion on the unsafe storage of Ammonium Nitrate – a crop fertiliser and explosive. Experts have said that when stored properly, Ammonium Nitrate is relatively safe. However, having large amounts lying around for an extended period of time can allow it to decay.

President Aoun has promised a full investigation to the cause of the blast, saying, “We are determined to go ahead with an investigation and unveil the circumstances surrounding what happened as soon as possible and hold those responsible and those who were negligent accountable and serve them the most severe punishment“

Reports are starting to surface on the extent of the damage caused by the blast. Emergency services are searching the rubble for any survivors and, as of writing, have confirmed at least 113 deaths and over 4000 injured. The country has also declared a two-week state of emergency, as a result.

Our thoughts go out to the people of Beirut and we will continue to update as the event unfolds.