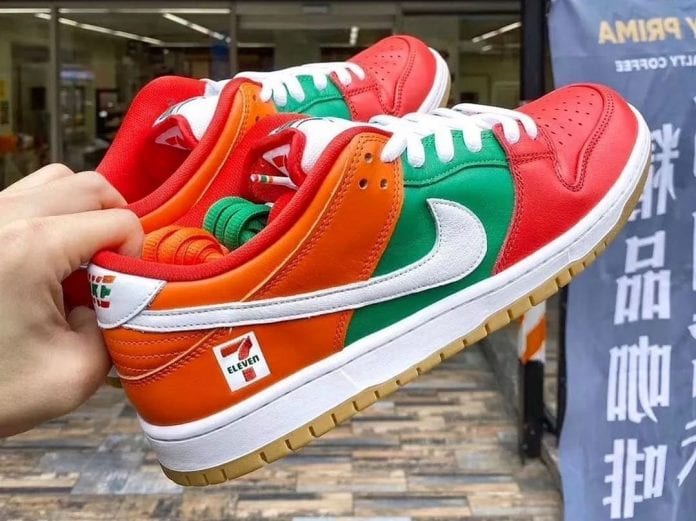 The keen sneakerheads reading this may remember that way back in 2008, Nike dropped a brand new pair of SB Dunks that had an unusual colour scheme. Specifically, the pair titled “Big Gulp” had colours that matched with the popular Japanese-American store company that is 7-Eleven.

Well, despite the resemblance, the pair were never an official collaboration between the two giants of their respective industries, however, now it looks like there is one on the way. In fact, not only did Nike confirm that a 7-Eleven x SB Dunk Low is, in fact, a real project, but various sneakerheads have been able to get a look at the upcoming pair.

As for what to expect, the sneakers arrive featuring a leather construction, as you would expect, but unexpectedly, orange lands on the heel, green adorns the midfoot and red covers the toebox. From here, the 7-Eleven’s logo is embroidered at the rear of the shoe while Nike’s iconic Swoosh is placed on the lateral sides in a contrasting white. White padded tongues and a gum sole round the pair of nicely, take a look at the pair in their entirety below.

If you like the look of the 7-Eleven x Nike SB Dunk Low then you’re in luck as they are set to drop this summer, why not sign up to our newsletter so you can be the first to know it’s specific release date once it’s announced?

This photo is from Taiwan 7-11

Somebody saying those 7-Eleven are fake. Nope.