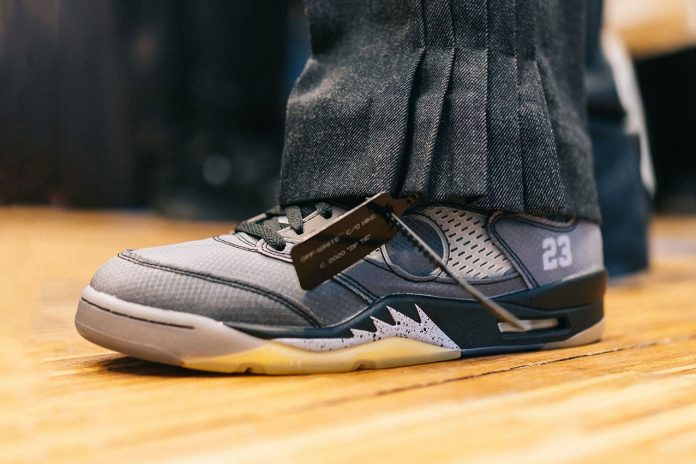 While at Paris Fashion Week, the renowned American fashion designer that is Virgil Abloh revealed, to much surprise of sneakerheads around the world, that Off-White™ was introducing a brand new collab focusing on the Air Jordan 5.

The new iteration of the famous Nike sneaker has been welcomed with a mixture of reactions, some strongly in favour and others calling for Virgil to hang up his SHOELACES. As for what we see though, it’s colour scheme is comprised of dark hues such as black, grey and gum, all of which sit among translucent detailing and the usual Off-White™ finishing touches.

The midsole often draws the most attention, a consequence of a spiked and speckled midsole. However, from here the large Jordan branding on the tongue can take over, if not the black plastic hangtag.

Take a look at the Off-White™ x Nike Air Jordan 5 below, if you like what you see then sit tight as the sneaker is said to be releasing sometime in Feburary, stay tuned for more details.