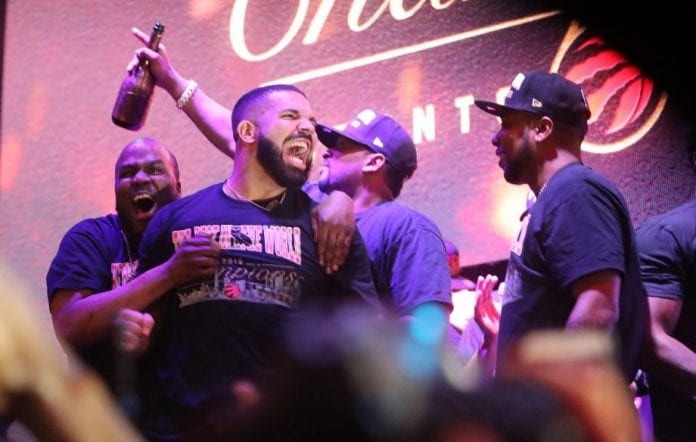 If you haven’t been living under a rock for the past few months, you know that there is no bigger Raptors fan than Drake himself and after the team becomes that first Canadian side to ever win an NBA Championship in NBA History, there have been a fair few videos demonstrating how happy Drizzy really is on this very special occasion.

Drake isn’t the only one that is ecstatic about the victory, there have been reports by Toronto residents of streets being filled with fans playing Drake tunes, sirens, car horns and chants from those who are celebrating the sporting victory.

“This is poetic, you just gotta watch it happen,” Drake said in an emotional interview after the game. “The 6 in six, Kyle Lowry with the ring, Kawhi Leonard bringing in chips to the city… I want my chips with the dip, that’s all I know.” After the Raptors victory, Drake went to his Instagram and announced that “two songs dropping tomorrow” as well as “designing the rings” for the Raptors.

Currently, the only details that have been released are that they are called ‘Omertá’ and ‘Money in the Grave’, they feature Rick Ross, and the songs are to be released VERY SOON so stay tuned to be the first to know.