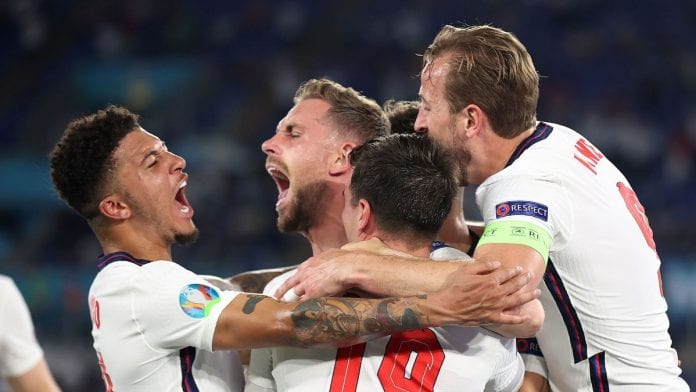 The prospect of an England v Ukraine clash in the Euro quarter-finals seemed ironic in a week where British warships had sailed in the Black Sea in support of their allies and as a sign of defiance against Russia and its claims to the Ukrainian Republic of Crimea. But any thought of being allies was put to one side as England made their first – and last – trip away from home turf to face Ukraine.

And so it was that there was no Wembley crowd to roar the Three Lions to a 4 – 0 victory – their greatest goals tally ever in a European championship and another clean-sheet for Gareth Southgate’s squad that took them to their first-ever semi-finals appearance in 25 years.

Harry Kane MBE scored twice, his first after just 4 minutes of play, with Maguire and Henderson – his first for his country after 62 appearances – completing the tally.

Speaking after the game Henderson said “It was a very good night. We’re so pleased with the performance level. We defended really well and scored some great goals.”

“Something special is happening with England…. roll on the semi-final” said England legend Alan Shearer. Spain and Italy will meet before England take on Denmark. “We’re on the right track for sure. But look, we haven’t done anything yet” said Kane.