The Rabbit Society
Home Sport Extreme E: The Details You Should Know 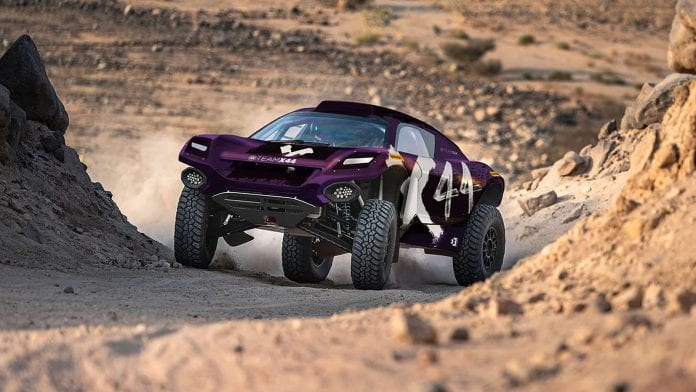 The 5-race global challenge where 4-wheel drive electric vehicles race against each other across iconic scenery kicks off with the first race in the Alula region of Saudi Arabia on 3-4 April. Home of the world’s largest continuous sand desert, the terrain is stunning and unforgiving while the heat and conditions will be intense.

The first race will highlight the environmental consequences of ‘desertification’ – where increasing temperatures, deforestation, overgrazing and unsustainable water use all contribute to the degradation of the environment.

As for the cars, they are all the same: battery-electric, 400kw (550hp), 1650kg, 2.3-metre wide, niobium-reinforced steel alloy tubular frame and roll cage, capable of firing from 0-62mph in 4.5 seconds. There are 10 teams in all coming from Germany, Indonesia, Spain, the US and the UK. Team X44 – named after his number – has been formed by 7-time F1 World Champion Lewis Hamilton, whilst JBXE is the creation of Jenson Button.

The focus of the second race in Senegal on 29-30 May, will be our oceans –half of coral reefs have already been lost, fish stocks are on the point of collapse whilst plastics and oil spills are contaminating food chains. In Greenland, on 28-29 August it will be the melting ice caps. The final races will be in Brazil (October) and Argentina (December).

The series promises to be a fantastic spectacle and we’ll keep you posted as it all happens.

Extreme-E: The Results Are In

What is Extreme E Racing?