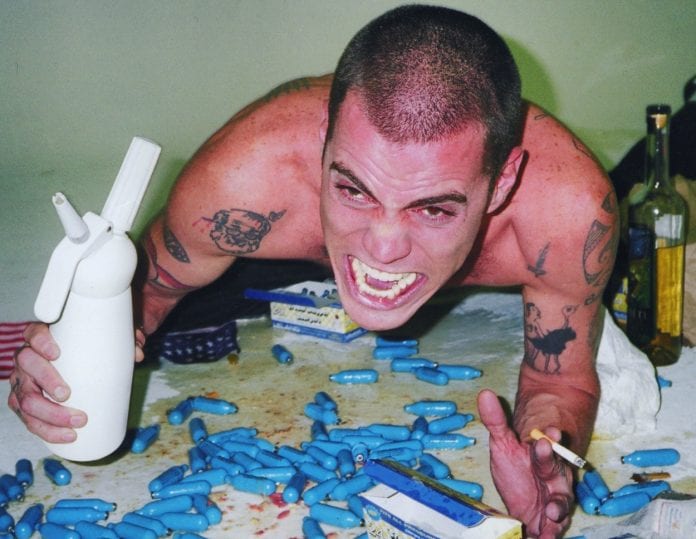 Steve-O has one of the most recognizable voices around. The combination of pitch and sandpaper-like texture makes it something even the most throat-abused thots would be jealous of. However, it’s obvious that he wasn’t born with it that way.

Well, in his latest YouTube video he goes into detail explaining the many factors that have contributed to it. He starts by showing us footage from his pre-Jackass days to show us his natural voice, before going chronologically through his TV appearances to pinpoint where it all started to go so raspy.

Hearing him on REAL TV – still prior to his Jackass days – shows us that even after his first experiences with cocain and meth, his voice was still pretty average. Although, this changed when he moved out to California to start work on Jackass. Smoking heavily and downing bong-water and glass led to the light-hearted Darth Vader voice we know and love today. So much so that after just a few months in California an his friends could already mimic his voice well enough to do interviews for him.

Out of all the drugs he tried, Steve-O puts a lot of the damage down to his use of nitrous oxide, more commonly known as nos. He states his latest video that at his worst he was buying 600 cartridges at a time, and doing them all within 24 to 36 hours.

Due to his family’s concern, Steve-O went for a health checkup and found out that he had Barrett’s oesophagus. It’s a potentially serious complication that sees the normal tissue lining of the oesophagus turn into the kind of tissue that resembles the lining of the intestine. Having said this, Steve-O has been sober for 11 years and his doctor recently confirmed that his oesophagus is in good nick, so why is the voice still so unique?

After a visit to Dr. Randy Schnitman, Steve-O found out that it’s actually more due to how he uses his voicebox, rather than what he has inflicted on it. Consequently, there is no reason that after some voice-coaching – which he’s taken up – he wont be back sounding like the sexy jazz singer we always knew he was.

We highly, highly, highly recommend you watch his video in order to get the full low-down on his voice, you can do so below. You can also order his latest project, Gnarly, by heading over to https://www.steveo.com/.