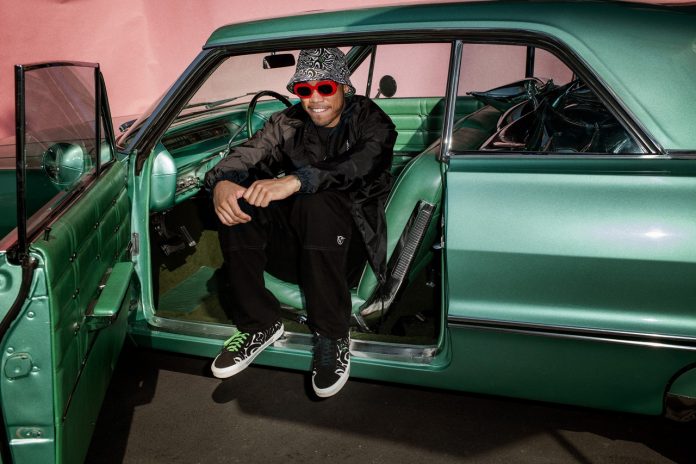 Vans have welcomed Anderson .Paak as the brand’s first Global Music Ambassador. Having once worked at a Vans retail store in California, .Paak is now one of the judges for Vans’ global ‘Musicians Wanted’ competition. This is after already performing on the House of Vans stage and featuring in the brand’s Sidestripe Sessions.

In order to celebrate the partnership, a small collaborative footwear and apparel pack has been revealed. Inspired by AP’s Southern California roots and his critically-acclaimed breakthrough albums Venice and Malibu, the collection is sure to catch-eyes.

Specifically, the two-piece footwear assortment consists of the Old Skool DX silhouette. This is the pair that’s inspired by .Paak’s debut album, Venice. Consequently, the pair features a wavy, psychedelic upper that mixes digital print and 3D printing for added depth and texture. It’s rounded off with bold yellow eyelets and a translucent blue vinyl Sidestripe.

Secondly, the Sid DX pays homage to AP’s 2016 album, Malibu and boasts Vans‘ Flying-V branding on the lateral sides. Underneath this sits an embroidered chenille uppers which are complimented by tonal black laces and stitching. Each pair is finished with green waffle soles and a tongue that carries a message from AP.

The Vans x Anderson .Paak collection includes matching Bucket Hats, you can view all of these products below. The collection will be available worldwide on the 13th of November and will retail for £37 – £95.

How to Skate London’s Pop-up Skatepark, ‘The Strand’