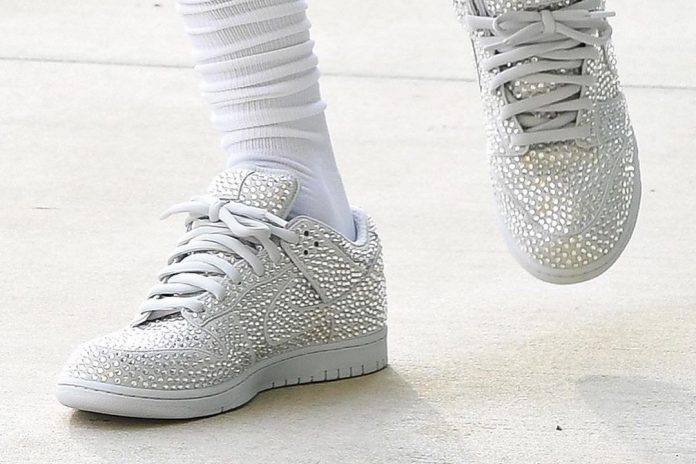 Sneakerheads around the globe were excited to hear that yet again Cactus Plant Flea Market and Nike were teaming up. However, it has only been now, after many months, rumours, and concepts, that the duo’s latest project has been revealed.

Specifically, the streetwear brand‘s newest collab sees them take on the global sportswear conglomerate’s Dunk silhouette. Now, although many would be happy to hear that it was this sneaker model that has been revamped, others have been critical of the design that followed. That design seeing a Dunk covered in bling.

Specifically, the CPFM x Nike collaboration is covered in Swarovski-esque rhinestone crystals, something which has been steadily rising in popularity, possibly since Supreme‘s bejewelled BOGO. Underneath the crystals sit a light grey Dunk constructed from a synthetic textile. Other changes this collaboration has manifested are regarding the collar flaps, which hang loose rather than being stitched down like they usually are.

Take a look at the Cactus Plant Flea Market x Nike Dunk Low below. If you like what you see then sit tight as the pair’s release info hasn’t yet been announced. However, rumours suggest a release before the end of the year, if you want to be the first to know then make sure you subscribe to our newsletter.