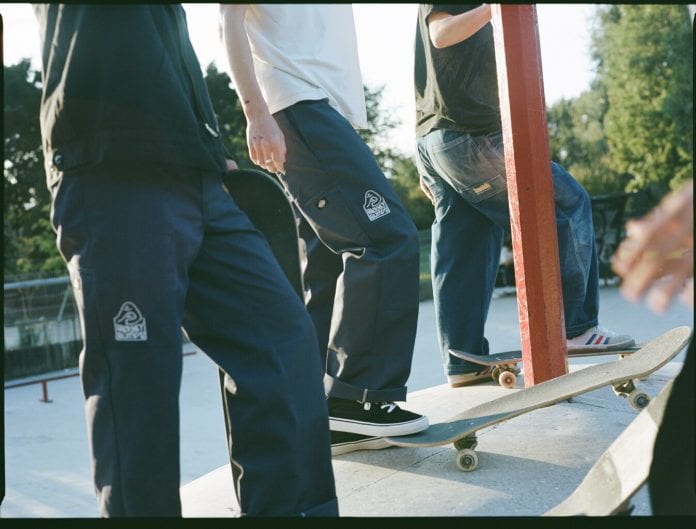 Dickies Life has looked to further their community-strengthening efforts once again, this time with the spotlight turning to the Hackney Bumps Community Group. The duo is dropping a small collaborative capsule, all of the profits will go towards maintaining and improving the community-based park. Dickies Life want to make sure the inclusive and diverse scene that has developed there should be able to continue and thrive.

As for the park’s history, the Hackney Bumps really aren’t that comparable to many other parks due to it being built in 1986 for BMX riders. Its unusual design is no longer seen in today’s modern skatepark builds. For the past few decades, the bumps have become steadily rougher and harder to ride, that was until 2019.

In early 2019 the Hackney Bumps Community Group was established by local skaters Greg King and Nick Tombs to renovate the park. Soon after, skatepark designer, Daryl Noobs joined the team, proposing an uncommon but comparatively financially economical renovation technique, by polishing its rough surface with a hand grinder. Now, although the group were set to receive funding, COVID-19 quickly put a stop to it. King and Tombs decided that they didn’t want to wait indefinitely for funding, so instead, they began polishing the park with two hand grinders. Working five-hour shifts, five days a week the two inspired more volunteers to join.

With no governmental support, the project was initially self-funded, they are currently trying to raise £30,000 via crowdfunding to pay for materials and a much needed second and third polish to protect it from the impending winter. So, if you want to support the project and receive some nice gear while you’re at it, why not head over to Hackney Bumps’ online store to cop your favourites now? If you want to support the project directly you can also do so via their GoFundMe.