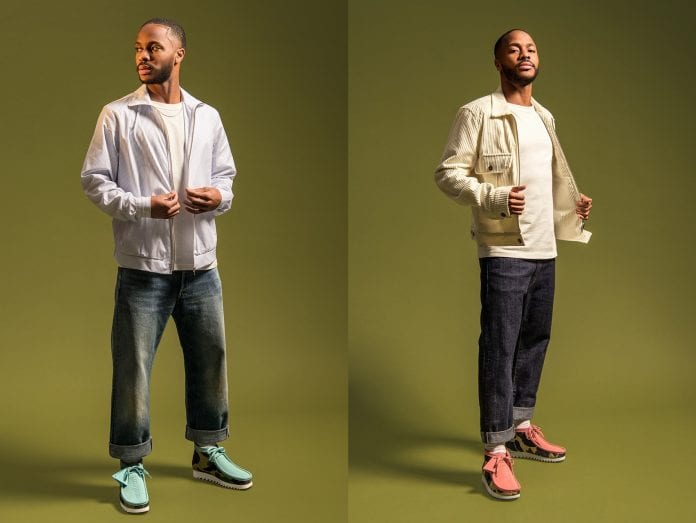 After releasing collaborations with numerous streetwear brands this year, Clarks looks to be trying to refresh their image amongst its younger wearers. Well, yet again we see another eye-catching team-up, with Clarks working with Japanese clothing giants, A BATHING APE, for a vibrant Autumn/Winter 2020 capsule collection.

Sported by England and Man City footballer, Raheem Sterling, the collection boasts interpretations of the brand’s Desert Boot as well as their Wallabee silhouette. Specifically, the Wallabees features an off-white shark tooth tread which contrasts with the two vibrant uppers. These uppers, land in either baby blue or a pinkish hue, both of which stand out against the camo patterns that make up the rest of the pairs’ surface area.

As for the Desert Boot, it is slightly more subtle, adorned in laser-printed BAPE artwork – which is different on each foot in a pair – and is completed with the signature crepe outsole.

Take a look at the BAPE x Clarks Originals capsule collection below. If you like what you see then sit tight as they will be dropping on the 8th of August via BAPE’s online store as well as Clarks Originals’ Berwick Street Store in London.