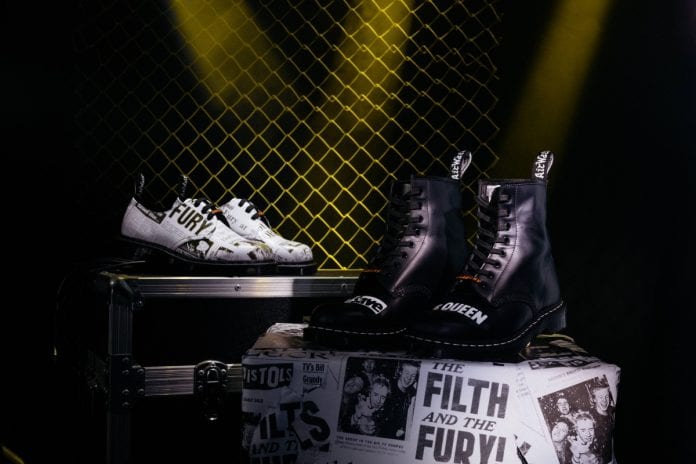 British footwear giants Dr. Martens have announced yet another collaboration, with the infamous punk band, Sex Pistols. This collaboration is set around the infamous 1976 Bill Grundy interview that put Punk Rock on the map for the UK.

The Sex Pistols tore into the host, Bill Grundy, live on air. The interview was so outrageous Thames Television 12 (the broadcasters) had their telephone lines jammed for hours, with people wanting to complain. This arguably ended Grundy’s career, but it was just the beginning for the Pistols.

The Dr. Martens 1461 shoe is covered in British newspaper headlines from the day after the interview, detailed with punk imagery and icons. As for the 1460 boot, it comes with ‘Sex Pistols’, ‘Anarchy’ and ‘God Save The Queen’ emblazoned into their smooth leather uppers.

As well as the two shoes being released, the collaboration is set to also release with an all-leather bag. The bag sports the same print as the 11461 shoe, as well as the sam ‘God Save The Queen’ emblazonment that adorns the 1460 boot.

How to Cop the Dr. Martens x NEEDLES Collab

How To Cop The New Dr Martens X Pleasures Collab