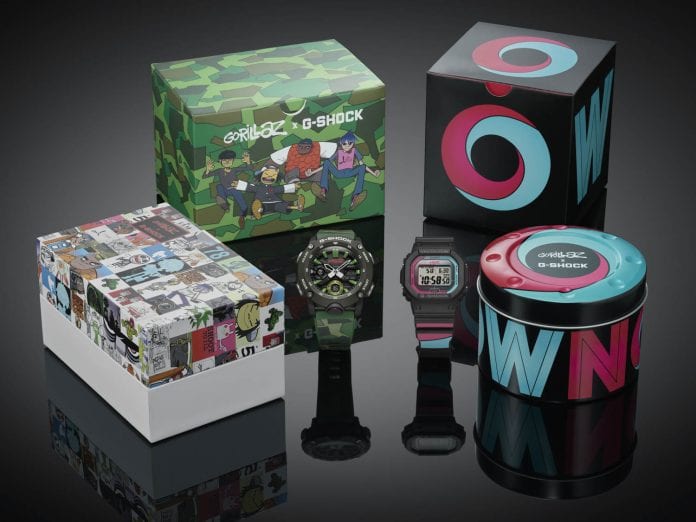 Following in the footsteps of their previous sold-out 2018 collab, the iconic British band that is GORILLAZ, and the renowned watch-makers G-SHOCK, return for yet another collection.

Specifically, you can expect this final collaboration to boast two limited-edition G-Shock styles, both designed by Gorillaz co-creator Jamie Hewlett, with the inspiration coming courtesy of the recently-released Gorillaz album, ‘The Now Now’.

As for what the watches have in store, the first takes the form of the classic DW-5600 and has been adorned with the album artwork from the group’s most recent project. Consequently, combinations of blue and pink hues can be seen across the whole surface area. Interestingly, the DW-5600 also has a Bluetooth capability which can be synced with G-Shock’s proprietary app, allowing access to a variety of features and functions directly from your phone.

Secondly, we have the GA-2000, the latest watch to be launched by G-Shock. Well, what better way to break it in than to use it to honour Gorillaz’ 2001 debut release? This was done thanks to the edgy camo print that has become synonymous with the Gorillaz making up the design. Last but not least, this piece comes complete with two wrist bands – one featuring a matching camo print while the other provides a darker military style.

Take a look at the watches below, if you like what you see then head over to G-SHOCK’s online store or physical spaces in order to cop one for yourself, priced at £149.

How to Cop G-SHOCK’s Marble series