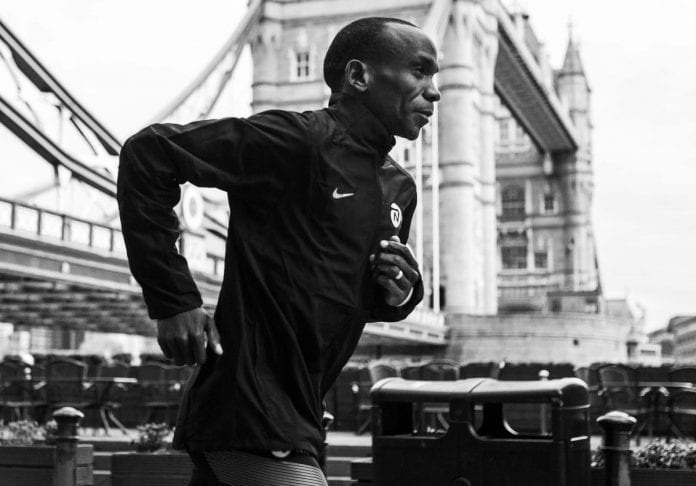 Eliud Kipchoge won his 10th consecutive marathon after coming in 1st place at the 2019 London Marathon with a time of 2:02:37. In fact, not only did the athlete win the race but he ran the second-fastest marathon time ever run – second to his own, a pretty neat way of collecting your fourth London Marathon title.

During six years of sheer dominance at the marathon, it’s not just that he wins over and over again. It’s how he wins. Kipchoge moves at a pace that makes the world’s best marathoners seem ordinary, straining and struggling: 10K in 29:01 and halfway in 1:01:37 when he started to crank through the gears at the front: four miles that were ruthless and consistent: 4:32, 4:34, 4:34, 4:32.

Few could handle it. One by one, they were being burnt alive by his searing pace, Kipchoge passing 30K in 1:27:04 – that’s 18 sub 5 minute miles. The official race splits clocked Kipchoge’s 25th mile at 4:30, but renowned race measurer Sean Hartnett noted that, because of an error in where the marker was placed, that split was incorrect—it was actually a 4:26. Kipchoge followed it with a 4:30 mile and by then the damage was done.

He coasted past Buckingham Palace in splendid isolation and rounded the final turn to The Mall, where the crowds roared to welcome distance-running royalty. With 10 marathon victories in a row, the world record, and today adding a new course record for London to his list of accomplishments, there is little doubt Kipchoge is the undisputed king of the marathon.

By winning London for the fourth time, he did something no man has ever done. But that is the story of his career – re-positioning the boundaries of human potential.

“No man is limited,” he said after. “It’s the love of sport and working hard,” he said. “That’s the only thing that is sacred in this world.”

What is next for Kipchoge? He had barely reflected on the London marathon before he was asked about the future.

“In Africa, we have a saying: don’t chase two rabbits at once,” he said. “My rabbit was the London Marathon, and now I need to go back, sit with my coach, and see what I will do next.”

A humble hero from the highlands of Kenya who has not only conquered the world of sport, but did it with grace, humility, and a kind of class that is all too rare at the highest levels of sports.