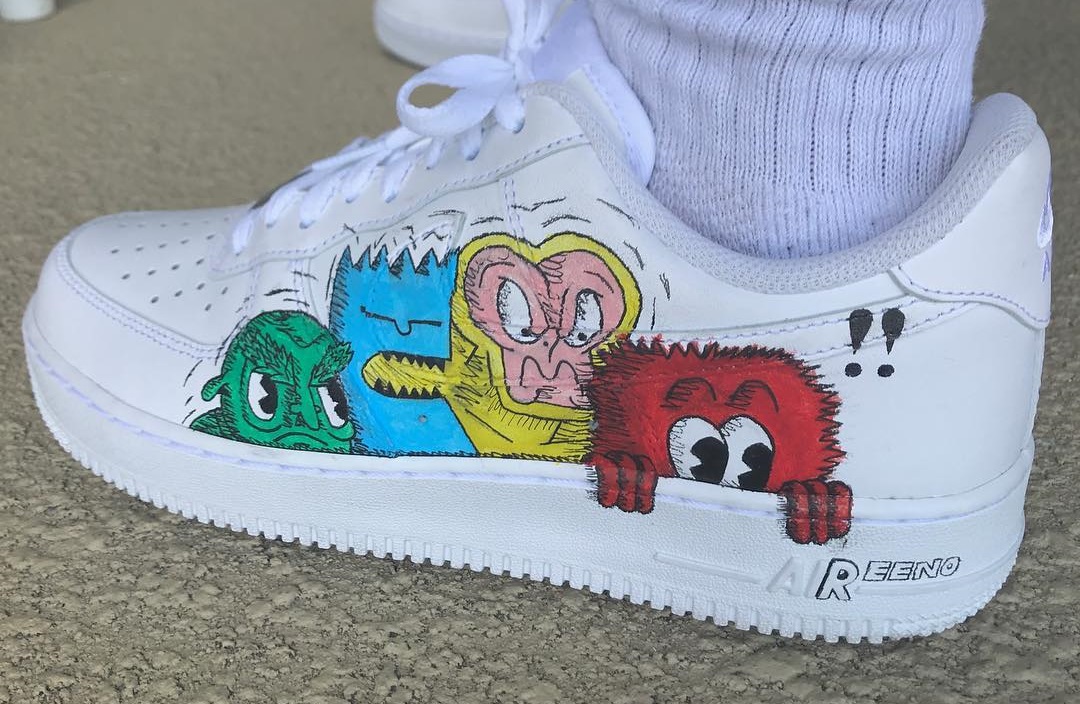 From tees in collaboration with Billie Eilish to a baked Air Force 1 pie, REENO Studios is not afraid to push the boundaries when it comes to forms of creating and developing aesthetics, that’s why when we had the opportunity to throw some questions their way we were excited to see what we would find out, here it is…

So who is the person leading REENO Studios® at the moment?

What first got you into creating designs and visual work?

“I’ve always drawn. I was always in an environment where art was encouraged. When I had an idea or cool thought/ concept, there was, to me, no choice but to draw it out. I was learning about myself while doing it.”

Who are your biggest inspirations when it comes to creating?

“At this point there’s no one I really want to work with, I really just want to improve my art more and more to the point where my potential is visible and thus unquestionable.”

As we have just started a new year, what are your aims for the next 365 days?

“Learn all the main key-points/ people/ events associated with that which I’m interested in. For example, learning about all my favourite artists and what they did to “make it” in the art world. To learn from all of these examples will make my, and many others’, journey much simpler.”

“I want to destroy boundaries in art and other aspects of life so that others can see what’s truly possible, and unrestrict their minds.”

If you could only pass on one message or lesson to your followers, what would it be?

“If anyone has ever done anything before, not only can you do it too, but you can do it better because you get to learn from their journey. They’re human and you’re human, so really the only difference is mental. And if no one’s done it before, all the more reason you should do it.”

What/who are your top 3 favourite brands/designers at the moment, and why?

“- Imran Potato. Every time this guy drops something it’s consistently better than his last thing. It motivates me to innovate.

– Damien Hirst. What I love most about Hirst isn’t his actual creations but rather his fearlessness in creating art. He will switch from a painting of a bunch of spots to sawing a (dead, from natural causes) cow in half and putting him on display in a museum. He’s one of the most hated people in the art world, along with one of the richest. But he doesn’t do it to stir up controversy, he just isn’t affected by the controversy it causes.

– Joy Divizn. He’s one of the few people I know that is actually serious and disciplined about going somewhere with his talent, and it’s evident in his creations and marketing. I always see him on his grind and it inspires me to reside in the same state. Looking at his art, you can see the love behind it, it’s awesome to see someone succeed while doing what they love.”

So far, what are you most proud of creatively?

First is my Shoeberry pie (Blueberry pie made in the shape of an Air Force 1 sneaker) I had a drawing of this concept on my page for a while, and while it was a good drawing and I liked it, I always thought it would have been better if it was a real pie. So I designed, sculpted, and baked an actual, edible shoeberry pie. I feel like no one else would have gone that far with it, so I’m glad I did.

Second is the Foldables. I create foldable toys on my website that can be printed out and folded into a 3D figure. I love this concept because it’s a way that I can give all of my supporters a free REENO product, and it’s something that actually looks cool on your shelf. Something you can look at and hopefully be inspired by or proud of because you made it yourself.”

What’s your advice for those who are looking to break through in the design industry?

“Don’t fuck around, make it your whole life purpose. Constantly take steps toward your goal and continue to improve every day. Try to think differently than anyone else has ever thought, even if it’s a horribly impractical idea. At the same time, don’t be afraid to build off of that which already exists, and sparks your creativity. Every day should be better than the last (making everyday the best day ever). Develop good and healthy habits and drop unhealthy ones. Only hang around people who inspire you. If anyone makes you feel bad about your self ever, deeply consider why you spend any time with that person. Lastly, like I said before, learn everything you can about what you’re interested in.”

What’s next for REENO Studios?

“A bunch of different kinds of art. Stuff that you see and you go “Damn I didn’t know that could be done,” Stuff that breaks the subconscious boundaries in your head of what’s “allowed” when considering art. And of course, more positivity and knowledge being spread as I learn & grow.”