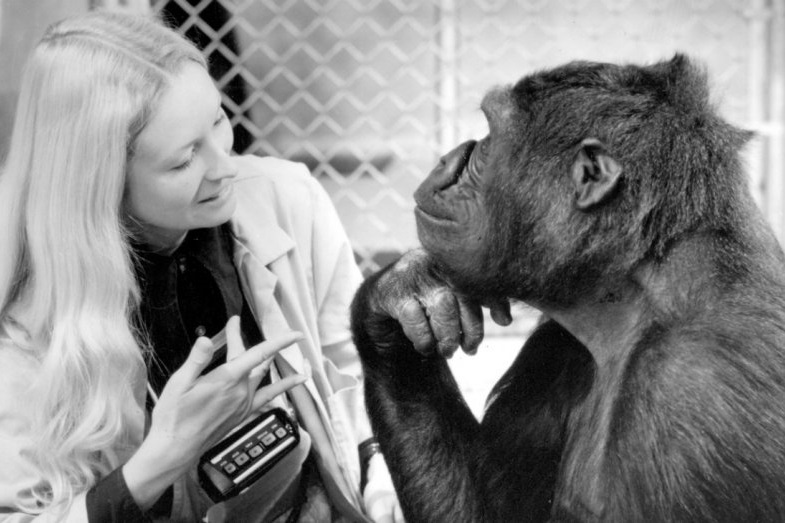 Hanabiko “Koko” was a female western lowland gorilla who became famous for being the first gorilla to learn a large number of hand signs from a modified version of American Sign Language. This allowed her to develop a close relationship with the American animal psychologist, Francine “Penny” Patterson. Their relationship became a historic one as they were the first two individuals from different species that shared a developed common language.

Koko gave humans a first look into the mind of a gorilla, displaying a range of emotions that were almost impossible to see in their full extent without her language capabilities. The gorilla even asked to and then did adopt kittens and cared for them with as much attention and affection as a human would. Furthermore, when she met Robin Williams, the actor who starred in her favourite movie, Mrs. Doubtfire, Koko struck up a loving relationship and became “extremely sad”, signing the word “cry” upon hearing that Robin Williams tragically died.

As for Koko’s passing, the Gorilla Foundation announced Koko’s death, saying she would be “deeply missed,” adding that “Koko touched the lives of millions as an ambassador for all gorillas and an icon for interspecies communication and empathy.” Furthermore, the organisation added that they “will continue to honour Koko’s legacy with ongoing projects including conservation efforts in Africa, the great ape sanctuary on Maui, and a sign language application featuring Koko for the benefit of both gorillas and children”.

She will be deeply missed.