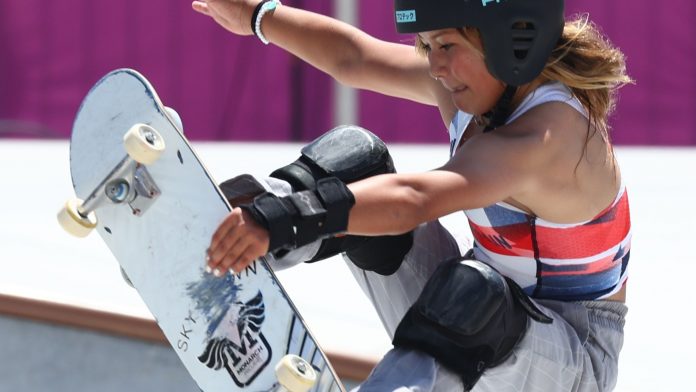 After falling twice and recovering to make a blistering 3rd run, Sky Brown – aged 13 years and 28 days – took the Bronze medal in the women’s park skateboarding final and promptly broke down in tears after becoming Great Britain’s youngest Olympic medal winner of all time.

“It was a super sick final,” she said “all the girls were ripping it, it was insane… it’s incredible – it feels unreal! I’m so happy to be here – I’m blessed.”

Brown replaces swimmer Sarah Hardcastle as Britain’s youngest summer Games medallist. She was15 years and 113 days when she won silver and bronze in Los Angeles at the 1984 Olympics.

Gold was taken by Japan’s Sakura Yosozumi, 19, with the best score of 60.09 points, while 12-year-old compatriot Kokona Hiraki claimed silver with 59.04 as the sport made its Olympic debut with athletes performing tricks in a huge concrete bowl.

Sky nailed her final run, landing a kickflip indy – the trick that caused her to fall in her first two attempts – sank to her knees and when pre-competition favourite Misugu Okamoto fell, confirming bronze for Brown, she couldn’t hold back the tears as she hugged her rivals before being lifted in the air by her father.