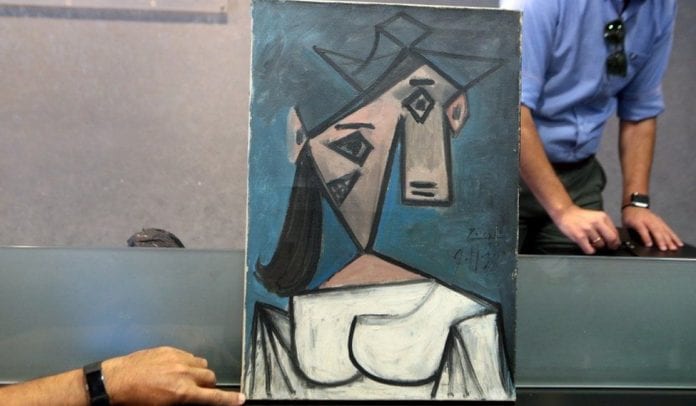 It was over 9 years ago that a painting by Pablo Picasso was stolen during a heist on the Athens National Gallery. As well as Pablo’s ‘Woman’s Head,’ a 1905 painting of a windmill by Dutch artist Piet Mondrian was also taken.

On Monday, police in Athens said that both pieces of art had been successfully found. As for where they were, they found the pieces hidden at a gorge on the outskirts of the city., both were in good condition. It turns out a Greek builder confessed to the crimes, saying he stripped them of their frames in the early morning raid which only took minutes to carry out.

The thief explained that 6 months of surveillance allowed him to map out the building, alarms, guards and artwork. However, the gallery didn’t help matters, it turns out that a number of security systems were faulty, and that protocals and procedures weren’t always carried out properly.

The significance of the piece returning to the gallery can’t be overstated. The artwork Picasso painting, a portrait of a woman in his signature cubist style, was given to the National Gallery by the artist himself back in 1949. He said the gift, painted a decade earlier, was in recognition of the country’s resistance to Nazi Germany.

A second Mondrian painting was left at the scene during the heist after thieves dropped it while making their escape.

Officials are expected to hold a press conference about the art recovery on Tuesday.