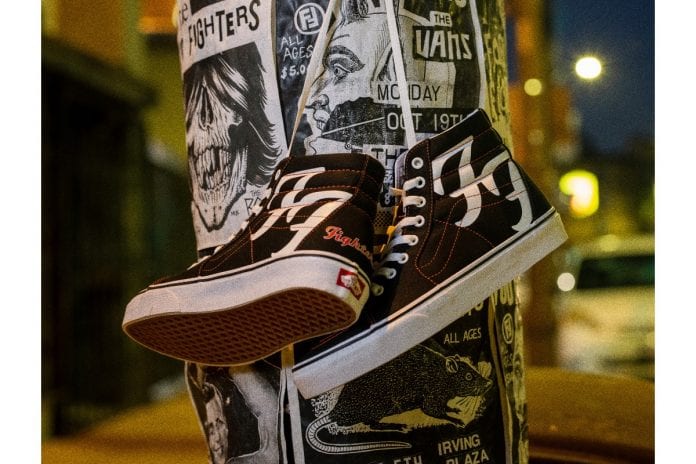 Vans have teamed up with rock legends, Foo Fighters, for a commemorative Sk8-Hi shoe. The shoe is being released to celebrate the 25th anniversary of the bands’ self-titled debut album.

The 1995 release of Foo Fighters was the first major step in the ascent of Dave Grohl, Taylor Hawkins, Nate Mendel, Chris Shiflett, Pat Smear and Rami Jaffee to their esteemed position as the last great American stadium rock band. On the album’s 25th birthday the bands’ Vans will be released; just days ahead of the February 5th release of Medicine at Midnight, the bands’ 10th album.

The 12-time Grammy-winning band have worn Vans from the studio to stages all around the world. Their anniversary Sk8-Hi’s feature black uppers with red contrast stitching. The Foo Fighters’ double F logo can be found in white on the medial and lateral sides, and “Foo” and “Fighters” printed in red on the heel of each shoe. The Sk8-Hi’s traditional jazz-stripe is only hinted at, with its shape outlined in contrast stitching—a nod to Foo Fighters’ stripped-down musician style.

The Vans x Foo Fighters Sk8-Hi is available worldwide beginning January 29th at Vans retail locations and on the Vans website and the Foo Fighters Website. You can check out the shoes below and be sure to subscribe to our newsletter, to never miss a drop date.

Vans Revamp Their Classics with an Extra Tough Skate-Suitable Construction